Evangelism can be done all over the world – and close to home. For Tennessee Bible College online teaching assistant Tim McHenry, the latter has been the case for the past several months as he and the Willette church of Christ congregation he preaches for have been ministering to Macon County’s Hispanic population. Along the way, McHenry has been improving his Spanish-speaking skills and making life-changing connections.

Q. How long have you been involved in this work?

A. I have been studying Spanish in a serious way for about three years. I have been involved in Latino ministry for about seven months. We have been in conversation with Bro. Bo Perez from Putnam County for a few weeks about how to get things started in Macon County like they were able to do in Monroe County, Kentucky.

Q. What are you and the Willette congregation doing to evangelize the Hispanic community?

A. Willette provides benevolent help to local Latinos on a weekly basis. Some of them are very poor and have a variety of needs. We mainly bring them food and provide clothing from our benevolent building. This gives us contacts that we hope to follow up with visits for Bible studies. We also provide Spanish Bibles and get tracts through the Spanish ministry out of the Forrest Park church in Georgia.

Q. Where is this work taking place? 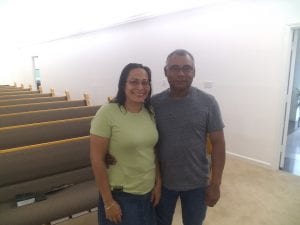 A. We have one established congregation that meets in the Rock Valley church of Christ building in Monroe County, Kentucky. That congregation is doing well. It meets at 3 p.m. on Sunday afternoons. We are going to start meeting on Saturdays with Bro. Perez to follow up on our Macon County contacts to get a group Bible study going at Willette.

Q. What inspired you to do this work?

A. I have always been interested in working with languages and with the poor. As many of us know, the church is predominately white and middle-class. This is regrettable. The common man “heard Jesus gladly,” and He was very mindful of the poor.

My goal is not to convert the Spanish speakers directly (I will always be a “gringo”!) but rather to facilitate ministry to them by getting the churches to support the effort to evangelize them and communicate with them in a meaningful way. Many Latinos are humble, hard-working people who simply want a better life in America. Most of them are Catholic or Pentecostal, but they are only so because of their background and have very little knowledge of the Bible.

I wish to help these people because I believe it is a great opportunity for the church to expand among them as we shrink among the middle-class white population. The church can find new vistas for growth if we will just work hard enough and try new things.

Q. What is the need in your area? How large is the Hispanic community? How many people are you working with?

A. The need is great. Macon County is growing in population, and the only minority to speak of is the Latino community. They do much of the manual labor jobs in the rural areas. The woodmills and agricultural jobs are dominated by them and provide them with a living but cannot provide for their soul. We aim to start Spanish-speaking churches in Monroe (already done), Macon and Clay counties. We are way behind in this. Other religious groups are already ministering to them in those areas, but we have not been in the churches of Christ. The one congregation we have established has about 20 in attendance. They are very nice, hard-working people. Some of them I have known for years but was unable to have a serious Bible Study with them until the Rock Valley church arranged for Bro. Perez to come and study with them in Spanish.

Q. Can you tell us about your efforts to learn Spanish well enough to preach lessons?

A. Right now, I can preach from a manuscript, but that is not the problem. I have been using the Bible to learn Spanish, and it has gotten me to the point where I can translate written Spanish fairly well. I get the gist of most things written and can translate large sections of Scripture on the fly without much trouble. However, my listening comprehension is very poor. I can’t follow the regular flow of speech among natives well enough to let them speak to me normally. I must beg them: ¡Más despacio, por favor!

There is no substitute for putting in the thousands of hours of listening to spoken Spanish to get “fluent.” It will come in time. As a side note, I am learning a lot of new Bible by translating each chapter and noticing things I have never seen before. I encourage all people to learn a new language even if you are not ministering with it. It keeps the mind active and allows you to see the Bible “deeper” when you read it in another language. It forces you to slow down and think about each word.

Q. What has been the most challenging part of this ministry?

A. As just mentioned, by far the most challenging part is listening comprehension. Native Spanish speakers use many idioms and “slang” speech just as we do in English. This is hard to follow. They compliment me on my pronunciation, and then when they respond to me in natural speech I more often than not just don’t know what in the world they are talking about! The main thing is not to be too ashamed to try, and keep on trying. Realize they are not laughing to make fun of you but rather just because of the comical nature of trying to communicate with a gringo. On the plus side, many Latino homes have children who are fully bi-lingual. They help you immensely in trying to communicate to their parents. Well, that is when they want to help. I recently was doing some visiting and trying to find a local home where Latinos lived. The young man next door thought he would get out of helping me by giving me that “No hablo inglés” stuff. I turned that on him real quick, and he ended up telling me what I wanted to know!

Q. What has been the most rewarding part?

A. No doubt the greatest triumph for all of us has been to see a very nice Latino family come to the Lord. I have known Luis and his wife for many years. He came to Mt. Gilead to church, but I could not minister to him and eventually he quit coming. He was worshiping locally with a different group but was unsatisfied. When brother Jason Thompson with the Rock Valley church told me he had started a Bible study with local Latinos, I was excited about coming. Imagine my surprise and super excitement when I went to my first study and found that one of those in the group was Luis! During the studies, he and his wife were baptized. After the baptism, we had another study about two hours later. It was with great joy that I observed and could understand that in Spanish Luis was encouraging a young man at the study to become a Christian! That young man has since been converted. Evangelizing two hours after your conversion – it doesn’t get much better than that.

Q. What other goals do you have?

A. Personally, I hope to become completely fluent in written Spanish and able to understand audible Spanish at an intermediate level within two years.

A. As an online teaching assistant with TBC, I have helped some with the online Spanish class setup, and I hope to get to where I can offer full service to our Spanish students in the future. I would love to see our class offerings in Spanish expand and attract new students to the program.